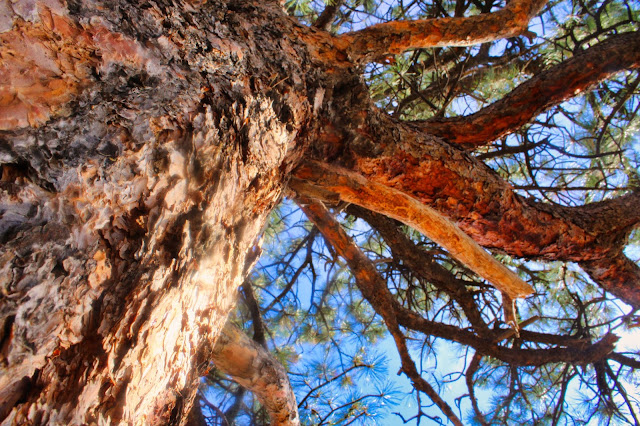 Is there such a thing?

In Genesis, God got busy naming things, well not directly, but the big G got the ball rolling with that famous opening line, “In the beginning, God created the heavens and the earth.” And shit started happening. The whole Heaven/Earth thing linked by that mischievous word, “and”, simultaneously joined and separated the whole shebang in a single breath. Things got complicated after that. God passed the buck to man, giving “him” authority to name things with the caveat that, “Whatever [he] called every living creature, that was its name” (Genesis 2:19). Arguably things have been going downhill ever since.

The naming of a thing prioritizes our conceptual rhetoric over an experiential encounter. It’s not conscious, it's just how our conditioned brains work. For there to be an upthere has to be a down. For there to be a rightthere must be a wrong. A treenaturally presupposes a “not tree”. The naming itself provides a cognitive framework for separation, whereby a thing becomes a noun rather than its native, relational and somewhat mystifying, verbness. The incomprehensible experience of treeness becomes “a tree”. We forfeit the complex network of connections and relationships in favor of an artifice of particulars and in return we gain a sense of separation and self preservation- the bedrock of this particular iteration of our human experience.

Naming is convenient to be sure. How else would we argue across political divides or compose sonnets while contemplating abstract physics? Words and our capacity for dualistic thought are hallmarks of human civilization, complete with our philosophies, ideologies, societies and politics. We run amuck when we mistake the name for what it points to.

Walking past the caramel trunk of a ponderosa pine warmed by sunshine and smelling like an earthy, vanilla embrace, I don’t see a tree, I see systems of belonging. I see insects and birds, animals and sunlight, constellations and mitochondria, root systems entwined with aspen, mahogany, fescue and more. I see fires and droughts. I see a century of exhales and my own lungs filled with mountain air. Do we have a name for this kind of seeing?

I wish we did.

I wonder how much more alive we might feel if we held our propensity for naming, conceptualizing and compartmentalizing lightly in one hand and the whole unnameable mystery of being in the other? It’s quite possible we will find ourselves laughing in the garden, astonished by our own belonging and conscious, perhaps for the first time, that the nature we'd been destroying was no less than the same invisible God we’d been worshipping all along.

Click here to read it on elephant journal:
https://www.elephantjournal.com/2021/09/do-trees-exist/

Popular posts from this blog

Old Man and a Pigeon

April 20, 2021
My dad sat quietly on a chipped azure bench, blue eyes watching the tide like an old friend.  Weathered hands tugged at the corners of a thread-worn, teal blanket wrapped securely around shoulders, once broad and strong, now narrowed and bent. White hair and a wayward beard blew like sea foam across his face, assaulting eyes with sand, salt and curls.  My dad didn’t use to lounge on the park benches of tourist traveled beaches.  No.  He preferred unguarded waters and abandoned stretches of sand on which to rest his chronically tan and muscular body. At ninety, his feet no longer walked with their former ease on the unsteady shoreline, so he sat instead, listening to a distant surf with face tilted to the sun. I perched on the sand at his feet, grateful for a few hours together.  Dad opened his eyes when a pigeon landed nearby with a flutter of wings and a soft, “pruuuu, prrruuu.”  Dad watched the bird pecking at the sand.  Soon more pigeons arrived and their chorus of “pruuuu, pruuuu,
Post a Comment
Read more

August 28, 2011
Okay, here is the much anticipated post from my recent adventure at Anderson Ranch in Snowmass, CO.  Honestly, I don't have words sufficient to fully credit the experience.  It was a bit like turning inside out and finding yourself whole again.  I grew so much and am now painfully filled with a longing to make art...NOW.  Not my usual crafts, but PAINTING and creating and listening and beholding. The photo below is an exterior shot of our studio. And this fabulous woman is Judy Glantzman , our fearless, fabulous and utterly inspiring, leader! Here is the gang after a luncheon hike atop a bizarre yin/yang slab at the summit.  And here we are again.  It was so refreshing to discover myself as a woman again...not a mom, a teacher, a mate, a daughter, a friend...just as me and the real treat was that I loved her. One of the other attractions, was the simplicity of NOT having to cook.  Not for myself or for anyone else.  I was shocked by the relief this provided and how quickly
1 comment
Read more

pie in the face

July 14, 2013
In our house we have a general rule...if you learn to ride a bike you get to hit mom in the face with a  cream pie (click here) and today was the day!  Bodhi rode his bike all the way around crown hill lake, sooooo....  I got a pie in the face.  Of course I only stand still for the first pie  and after that its a free for all.  And by the looks of Bodhi I think I may have gotten the better of him.
Post a Comment
Read more

Angelina Lloyd
Who is Angelina? Interesting question. I tend to prefer, "Where am I?" and when I forget to ask altogether, I am astounded by the breathtaking possibilities.